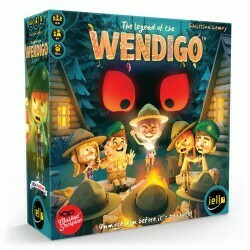 Legend of the Wendigo

All of the Junior Chipmunk Scouts gathered around the fire to hear the troop leader tell the terrifying legend of the Wendigo—a dreadful creature with a heart of ice. The legend says that the Wendigo's spirit still roams the forest and attacks anyone who dares to speak its name...

Work together to find the Wendigo if you ever want to see home again!

One player plays as the Wendigo’s spirit, which has taken on the appearance of one of the scouts. Every night, it steals another scout.

Each day, the other players can check the identity of a scout on the table. If they unmask the Wendigo before it’s too late, they win the game. Otherwise, the Wendigo player wins!